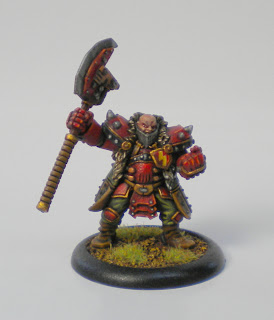 All GW paints and washes used on this guy, as I only have a few P3 paints. 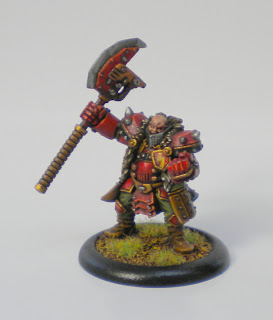 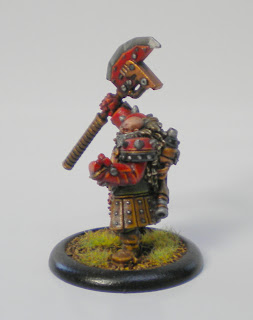 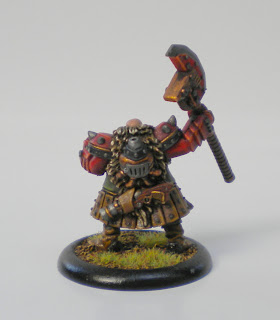 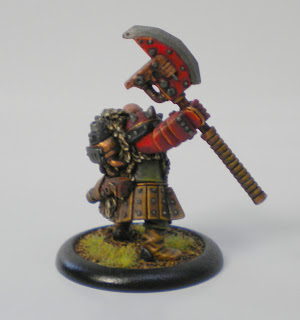 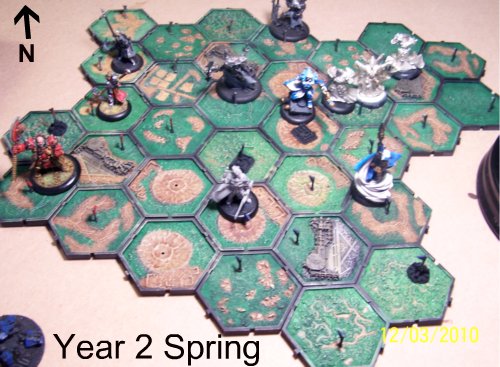 Detachment 2 Epic Hailey
Reinforcements: Squire
Action: Moved out of capital and towards the front line. Searches Nearby plains to no avail.

Detachment 3 Stryker
Reinforcements: Squire
Action: Stryker's company searches nearby barrens only to have its Journeyman Caster set upon by a Sand Dervish. Journeyman warcaster is victorious and finds a Pair of Duelist gloves (+2 RAT, Gunfighter and Virtuoso)while rummaging through an old chest. 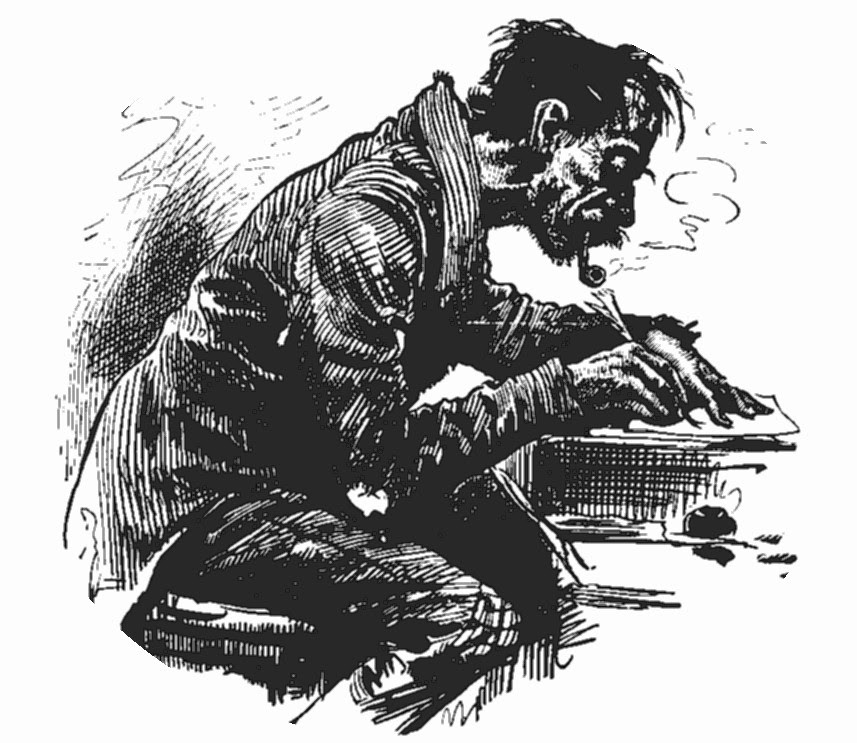 Is it just me, or is there a serious lack of Warmachine / Hordes blogs out there? We'll be doing our best to offer new and exciting content to fill the Warmahordes blog void, but we need more!!! If you are out there, please follow us and we'll do the same for you. I'll even add you on our blog roll. Let's work together to develop a Warmachine blog community.

In the mean time stay tuned for weekly reports on our campaign, hobby tips, Batreps, strategy and more. We have an author for each of the 4 main factions. Feel free to comment on anything else you would like to see, and we'll try and accommodate.

COME HEAVY OR DON'T COME AT ALL!
Posted by jcroxford at 9:58 PM 6 comments:

Email ThisBlogThis!Share to TwitterShare to FacebookShare to Pinterest
Labels: blog

So we wont get next seasons battle in till this weekend but we did get a practice game in. Went ahead and got dome practice doing the batrep too. First time so don't be too hard on us. Next time ill try not move the camera around so much and we will go to a different format of how we record the turns to include more detail. There are a few mistakes but doing the battle reports is drilling info into my skull so it should improve. Constructive criticism would be welcome.

I finally managed to complete my widowmakers. I love these guys (and gal). The models are full of character, as with most of the line.

The army as a whole is going to have red armor with green for the fabric, though I gave the leader a red dress and hat so she would stand out.

Posted by jcroxford at 5:00 PM No comments:

Ive always been big on converting but Warmachine presents some obstacles. Warjacks and most infantry come in pieces that don't lend themselves well to chopping them up. After a bit of thought i decided to start off with some simple things and see where it goes from there. 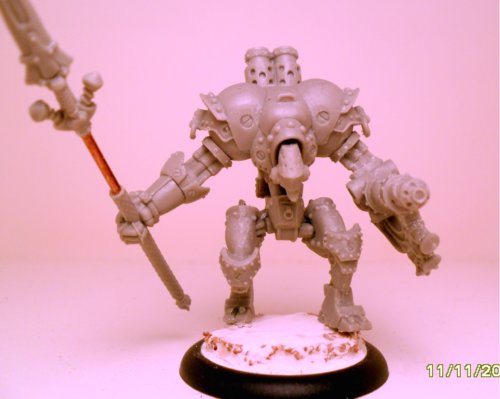 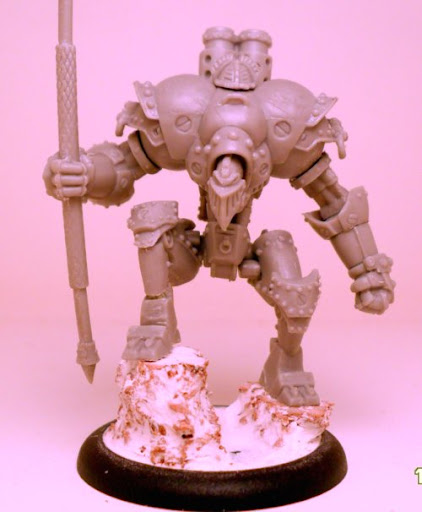 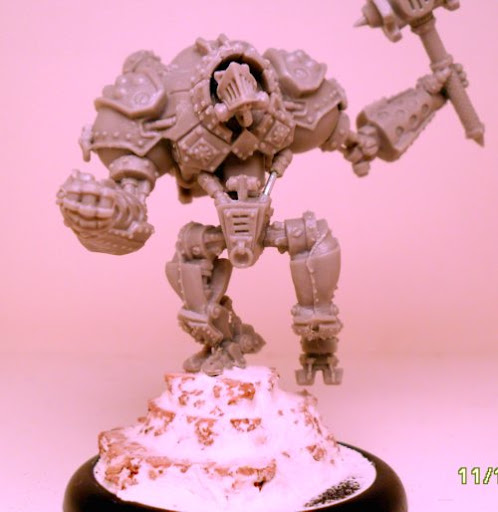 Ive decided on my basing for the army. I like to use cork board for basing but i am not a big fan of the texture on the flat surfaces. I thought id go ahead and use some spackling over the top. Has worked out pretty good. Super easy and fairly cheap for the amount of bases you can make with what you get. Ive spend about 25$ and have enough mats to base at least 100 models. Here's the results and an easy little tutorial.

Materials you need are spackling, super glue, cork board and bases. 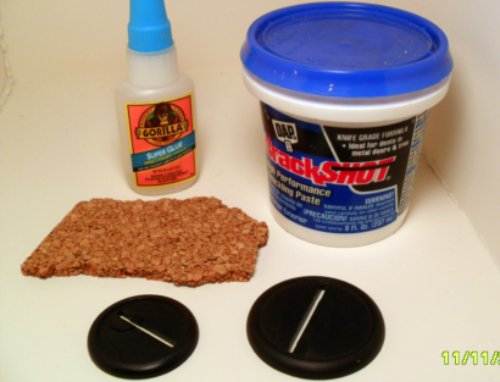 First step is to check where your models feet will sit the glue down your cork board appropriately. 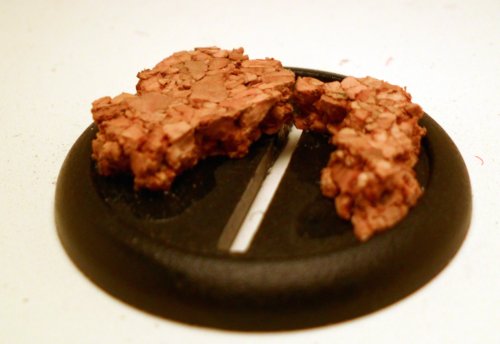 Next lather some spackling on. 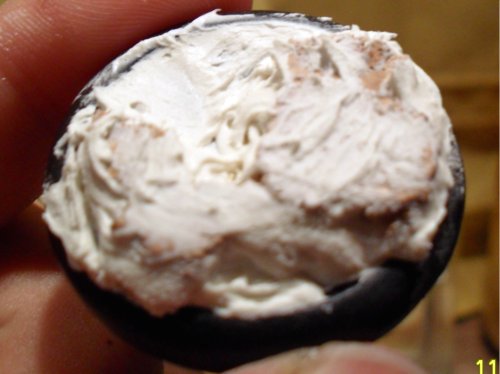 Now wash any excess of you hand or tools. With a damp finger wipe the excess off the base. 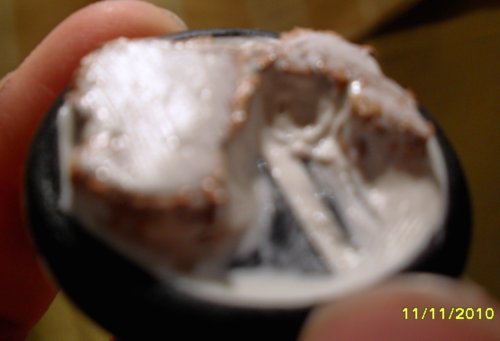 lastly i just take a hobby knife and edge around the base to make sure any excess is off the base and the line around the top is well defined. If you want to give it a bit of texture just dap with a slightly damp paper towel. I will be adding some balast to these after the mini is mounted and statis grass after painting. These 3 took me about 10 minutes. 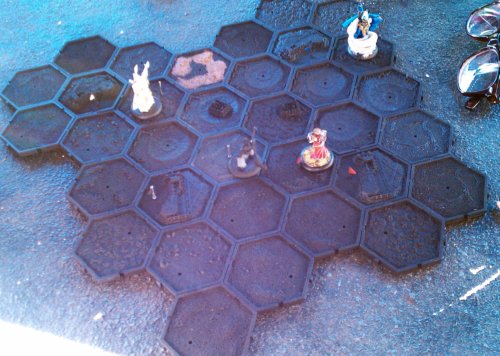 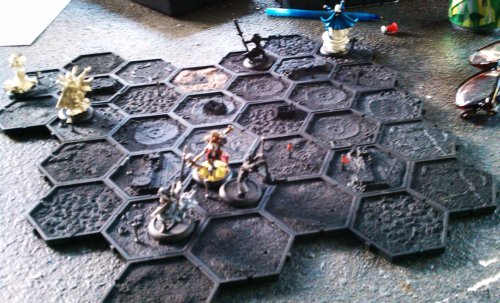 Fall
Khador falls back to lick its wounds and pool more resources
Menoth explores Orgoth ruins. Many Cinerators die during the exploration, but they come away with treasure! Double resources during the winter.
Cygnar, Mentoh and Cryx all buy third detachment
Cygnar, Menoth and Cryx conquer 3 areas, Khador conquers 1 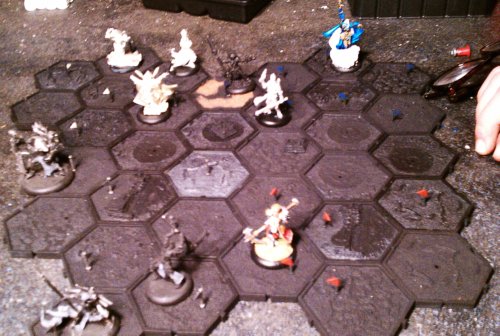 Winter
Cryx explores forgotten mines and comes away with a relic: the Vorpal Blade.
Cygnar explores to find Bandits! Nothing gained here, but they escape with their lives.
Khador purchases second detachment
Cygnar and Menoth each take a city area. Cryx takes 1 area and Khador Conquers 2. 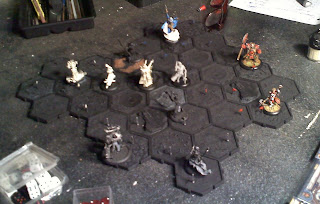 A few notes. Not all warcasters on the board are represented by their model. Next year we will fix that. As battle frequency increases we will probably have to start posting by season instead of year.
Posted by jcroxford at 10:29 PM 3 comments: Today we embarked on an epic campaign for the Conquest of Immoren. We'll do our best to chronicle the highs and lows of the campaign in this blog. Along with various other topics such as painting, modeling, and trash talking each other.

We are using the campaign rules here, and the Warhammer 40k planetary empires set for our map. 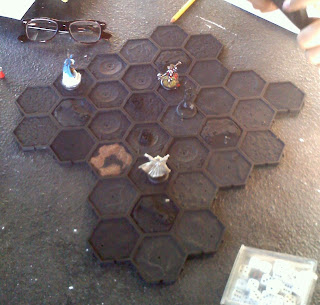 This is our first go at this and we are tweaking some campaign rules. Campaign posts should come about twice a month. Modeling and trash talking will show up in between. Our first year of campaign was a bit thrown together but in the future we hope to start doing video battle reports and have more organized details on turns. Stay tuned for year one of CONQUEST OF IMMOREN.
Posted by jcroxford at 1:13 PM No comments: